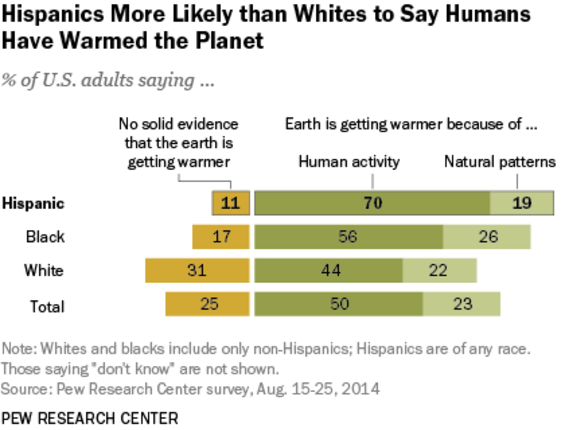 Hispanics are significantly more likely than whites to say the Earth is warming because of human activities and that the U.S. should do whatever it takes to protect the environment, a new Pew Research Center analysis finds.

Our analysis finds that Hispanics, who make up anincreasing share of the U.S. voting population in presidential elections, stand out when it comes to their views of the environment. Recent surveys from other organizations have had similar results. Democrats, the party most Hispanics identify with, have been pushing for more government action on issues such as climate change.

This week, President Barack Obama vetoed the Keystone XL pipeline, even as a majority of Americans – and about half of Hispanics – support the project.

The finding about Hispanics comes as the overall share of Americans who say there is evidence of warming has fluctuated over the past decade. In 2006, 77% of U.S. adults said there is solid evidence of global warming. That share dropped to 57% in 2009 before rising to 72% in 2014.

So why do Hispanics (and, to some extent, blacks) stand out? One possibility might lie in the age of the Hispanic population. With a median age of 27 years, Hispanics are significantly younger than whites (42), blacks (33) and the nation as a whole (37). Overall, younger Americans are more likely than older Americans to say the Earth is warming because of human activity. Six-in-ten Americans ages 18-29 say the Earth is warming due to human activity, compared with 31% of those ages 65 and older.

Recent surveys have highlighted a similarly high concern for environmental issues among Hispanics. A New York Times survey found that more than half (54%) of Hispanics said global warming is an extremely or very important issue to them personally, compared with 37% of whites. And nearly two-thirds (63%) of Hispanics said the federal government should act broadly to address global warming, compared with 49% of whites.

Another survey from the Chicago Council on Global Affairs also found high concern among Hispanics over global warming. More than half of Hispanics (54%) called climate change a critical threat to U.S. vital interests in the next 10 years, compared with 32% of non-Hispanics. A similar share of Hispanics (54%) said the U.S. government is not doing enough on climate change, compared with 49% of non-Hispanics.

This article originally appeared in the Pew Research Center.