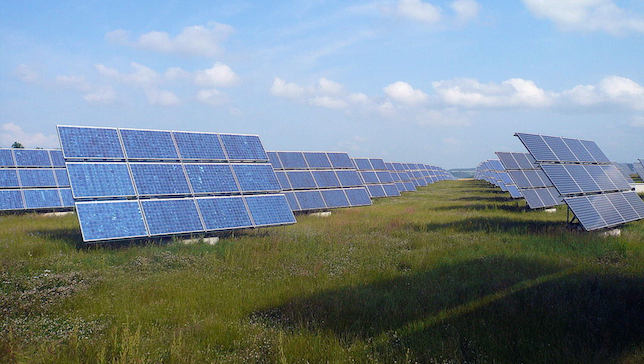 Solar power has been seeing dramatic growth in many countries across the world. In Latin America, however, the growth rates have been astounding. As my colleague Mike reported over at TreeHugger, Latin American solar grew 370 percent in 2014, and as if that weren't enough, it is expected to triple again in 2015. That's right, triple! According to GreentechSolar, Latin America is not just the fastest growing regional market for solar in the world — it's exhibiting the fastest regional growth in the entire history of the solar industry. The most obvious reason why Latin America is attracting so much solar investment is the same reason that so many North American tourists head south each year: It tends to get an awful lot of sun. In fact, as The Guardian has noted, Chile is often cited as having some of the best natural conditions for solar in the world: Solar developers have flocked to the hot, barren lands of northern Chile to take advantage of some of the best natural conditions for solar in the world. The high horizontal solar radiation in areas in and around the Atacama Desert make solar technologies more productive in these regions, translating into lower costs per unit of electricity generated.But while it's fairly obvious that lots of sun translates into lots of solar, there are many other factors involved too. Here are just a few:

Reliance on diesel & old coal
In countries with relatively mature grid infrastructure, solar often ends up competing with cheap, efficient natural gas and/or modern coal and nuclear plants. In many Latin American countries, however, solar is often replacing either expensive and dirty diesel generation and/or older (or not yet built!) coal-fired plants, meaning it is easier to compete on price.  In Panama, for example, UK-based Solarcentury is working with local companies to build what will be the largest solar farm in the country, and which will sell its electricity completely unsubsidized on the spot market. Jose Miguel Ferrer, Solarcentury's international business lead, explains why this project is significant not just for Panama, but as a sign of things to come globally:Solarcentury’s current project constructing a 9.9MWp solar farm in Panama for ECOSolar is a demonstration of solar’s ability to provide innovative energy solutions and compete on an equal footing in the Latin American energy market. This is one of a handful of spot-market solar farms in the world and is a further demonstration of solar displacing fossil fuels with zero subsidy.Of course, Latin America is not the only region where solar competes directly with liquid fossil fuels like diesel. In the Middle East, too, the National Bank of Abu Dhabi just concluded that oil can't compete with solar on price, even at $10 a barrel. The economics of traditional generation sources in these regions, combined with the rapid cost reductions of solar, mean the competitive landscape looks very different than it does here in the U.S. Let's not forget, too, that solar can be deployed in months, not years — meaning it is easy to ramp up a country's generating capacity much quicker than if you were relying on centralized, gigantic, fossil-fueled power plants.

Large off-grid populations
In countries like Colombia, a large proportion of the population still lives in remote rural areas with no, or insufficient, access to reliable electricity from the grid, yet as the country's economy begins to heat up after decades of civil war, demand for energy is growing too. Expanding the grid into these areas is a significant infrastructural challenge, and often it's simpler and easier to just install distributed generation capacity closer to where it will actually be used. The result has been many development organizations investing in off-grid solar.

Favorable policy environments (and a lack of subsidies?)
Critics of solar will often decry over-reliance on government subsidies, but there's much more to renewables policy than how much money you can suck from the government coffers. In fact, solar insiders I talk to are increasingly speaking about the need to wean the industry off subsidies, and they are often more interested in policy stability and sensible deregulation of energy markets that will allow them to sell electricity on a relatively level playing field. In the aforementioned Guardian article about solar in Chile, for example, it's notable that the boom there is less about government subsidies, and more about a favorable regulatory environment and financial stability:Chile has not set the price of electricity from solar PV through policy the way that these nations have. What it has done to help move projects forward, is to offer a higher degree of financial security than most Latin American nations and an easier regulatory environment.Counterintuitively, this relative lack of subsidies may actually be what attracts developers to Latin America in the first-place. Because projects in many parts of the world will remain reliant on incentives to break even for next several years at least, they are deeply vulnerable to policy changes and political challenges. If solar developers can diversify their portfolios internationally, especially in markets where subsidies are less relevant, they can insulate themselves from the short-term political cycles that can impact the policy environment.

Lots of room to grow
The last reason why Latin America is so hot for solar right now is that there's plenty of room to grow. While 300-plus-percent growth figures are impressive, they are largely being driven by one or two forward thinking countries like Chile. But as the industry grows in Chile, and as neighbors in the region begin to take note, I suspect we'll see other countries wanting a larger piece of the solar pie too.  Latin America will remain a region to watch for solar enthusiasts for some time to come.