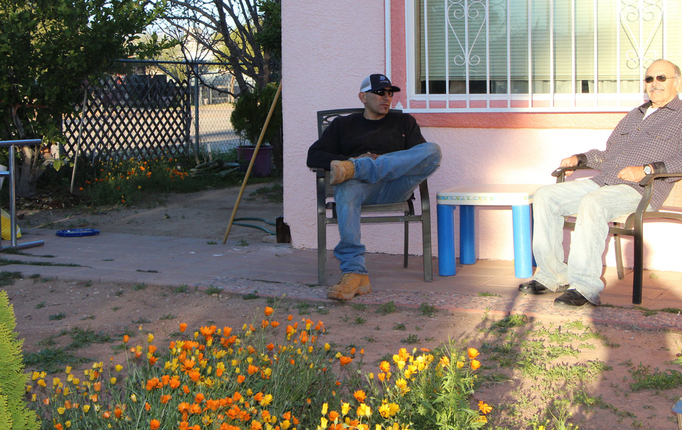 J.J. Hernández and his father sit out front of their home in southern Tucson and enjoy the cool February weather.

TUCSON — J.J. Hernández and his father enjoy sitting on their porch in front of their pink Tucson house, surrounded by yellow and orange wildflowers and bright green shrubs that J.J.’s mother planted around the yard.

Their house sits in stark contrast to many of the homes in southern Tucson, where few yards have thriving plants growing in the dry dirt.

Of everyone in Arizona who will be affected by climate change, families like the Hernándezes on the south side of Tucson are going to feel it the worst.

New research suggests that climate change could have more negative effects on the Latino population in Arizona. In a recent survey published by The Sonoran Institute, a Tucson-based nonprofit with labs throughout the West that investigate environmental issues, researchers and community leaders predict that climate change will cause significant problems for Latinos in Arizona because of home, work and economic conditions.

Over the last century, the average global temperature has increased by 1.5 degrees Fahrenheit, and the temperature will likely increase an additional 2.5 to 8 degrees by the end of this century, according to James Buizer, the deputy director for Climate Adaptation and International Development at the University of Arizona Institute of the Environment.

With Phoenix already reaching temperatures of 119 during the summer, an additional 5 or 6 degrees would make the heat in Phoenix comparable to Death Valley, the hottest and driest place in the United States, where temperatures can reach upward of 125 degrees.

“Latinos are more likely to work in jobs that are outdoors, whether it’s construction or landscaping, for six months out of the year, from May to October, when the temperatures are more likely to hit triple digits,” said Oscar Medina, a teacher at the Western Institute for Research Development in Tucson who specializes in projects focusing on environmental sustainability and literacy. “Because of this, they are more likely to be dehydrated and be exhausted and experience health issues that are a result of dehydration and heat.”

According to the U.S. Census Bureau, more than 30 percent of Arizona’s population is Hispanic or Latino, with most of the population congregating in Phoenix and Tucson, where heat is trapped because of the concrete and buildings.

The higher temperatures also increase the ground level ozone concentration, which is bad news for air quality. According to the American Lung Association, Phoenix ranks as the seventh worst city in the United States for air pollution. When the air quality is bad, tissues in the lungs and respiratory tracks can become damaged and inflamed, leading to difficulty breathing and increased risk of respiratory diseases like asthma and valley fever.

In Arizona, more than 9 percent of the population is living with asthma, and Hispanic children are three times more likely to suffer from the disease, according to the Centers for Disease Control and Prevention.

The Latino community is far from unaware about the issues they face due to climate change, and community leaders and companies in Arizona are trying to increase awareness about ways to save energy and learn about climate change.

“We aren’t just sitting on our butts waiting for things to happen,” said Medina, from Western Institute for Research Development. “There are efforts in place. However, those efforts need to be more explicit and direct to directly target Latinos . . . especially by making information in Spanish.”

One of the easiest ways to combat climate change, Medina said, is to plant shade trees in some of the poorer Latino communities around Tucson. One such company, Trees for Tucson, specifically emphasizes planting trees in lower- income neighborhoods to reduce the heat island effect.

In Phoenix and Tucson, Latino immigrants were generally earning less than $35,000 annually, making it less likely that they would live in homes with proper air conditioning. In poor neighborhoods, many homes are cooled with swamp coolers, and during the late-summer monsoons, humidity renders them ineffective. By planting a shade tree, Medina said, the tree can reduce the temperature of a home by 5 or 6 degrees.

“That’s big, especially when we are paying a significant amount of money to keep our swamp coolers running,” Medina said.

The Hernández family, with their yard full of blooming wildflowers and shrubs, can already feel a difference in the temperature around their home. In addition to this simple fix, J.J. created a makeshift irrigation system for his mother to collect rainwater, in another effort to save energy and water for the plants.

“It’s much cooler with the plants,” he said. “Sometimes in the summer, it’s almost better outside, especially with a breeze. And it helps us save money.”

While progress in making Latino communities more “green” may be slow, Medina said climate change is becoming a greater topic of discussion for Latinos.

“There needs to be more people focused on this, and everything from reducing our waste to rainwater harvesting and improving our transportations system,” Medina said. “Everybody can do their part, but I think we are now working together on this issue.”

Michaela Kane is a reporter for Arizona Sonora News, a service from the School of Journalism with the University of Arizona. Contact her at mlkane@email.arizona.edu.