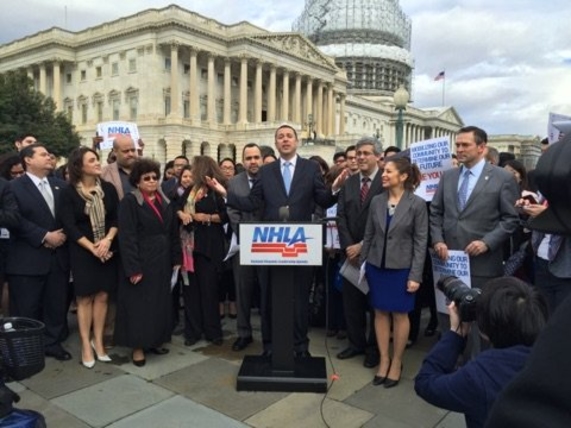 Voces applauds the National Hispanic Leadership Agenda (NHLA) on the release of their 2016 Hispanic Public Policy Agenda. This bold Agenda for the first time ever includes environment and climate action as policy priorities for Latinos. The Agenda signifies a critical turning point both for Latinos and our nation as a whole, adding to a narrative that is gaining powerful momentum: that we are ready to act on climate and move towards a future of vibrant and healthy communities. We proudly count many of the member organizations among our Voces Partners and Leaders. This is Latino Leadership in Action.

The following statements provide a snapshot of the overwhelming outpouring of support that we have witnessed from individuals in social media and from Latino leaders statewide:

“As a member of NHLA, we are thrilled that our colleagues join us in seeing environment as a priority and the recognition of its intersectionality with so many other issues. In many of these cases, Latinas are even more vulnerable to climate change and other environmental impacts because they face social, economic and political barriers that limit their capacity to prosper.” -- Amy Hinojosa, MANA President and CEO.

“I am delighted, though not surprised, by this demonstration of the depth of Latino commitment to the environment. In poll after poll, we see that Latinos come out stronger than any other ethnic group in their determination to curb carbon pollution, protect air and water, empower the EPA and transition to a low-carbon economy.” –

Former New Mexico governor Bill Richardson in an op-ed in the Albuquerque Journal.

“The NHLA was released at a crucial juncture. Key environmental laws like the Clean Air Act, the Clean Water Act, and the National Environmental Policy Act are under attack, and Latino leaders will be increasingly vocal in their defense in the coming years. We recognize that a viable 21st-century economy has a base in renewable energy sources, and that this economic transition means an expansion of opportunities for Latinos and the workforce as a whole.”— Former Mayor of Miami Manny Diaz in a Letter to the Editor in the Miami Herald.

"We know that one out of two Latinos lives in areas where air quality often does not meet EPA's public health standards and that given the types of occupations where Latinos are over represented including agriculture, construction, and landscaping, Latino workers are at increased risk of exposure to dirty air and the increased temperatures exacerbated by global warming, which carbon pollution drives."—LULAC

“When we discuss the health of our Latino communities, we cannot separate the environmental component. The majority of Latinos in the U.S. live in metropolitan areas where pollution is higher and health risks like asthma are more prevalent. In fact, Latinos disproportionately suffer the highest rates of asthma and nearly 2 in 5 Latinos live within 30 miles of a power plant. This is why NHLA’s announcement comes at a vital time, when the wellbeing and health of our communities depends on bringing environmental issues to the fore.”— Dr. Elena Rios, President & CEO of NHMA.

“Latinos face some of the most serious environmental impacts, disproportionately suffering the effects of environmental harms and climate change. Latinos also remain some of the most concerned about climate impacts and the most committed to calling for action to address these, and move towards a clean energy future. For us, these issues are real and personal.”— Adrianna Quintero, Founder and Director of Voces Verdes.