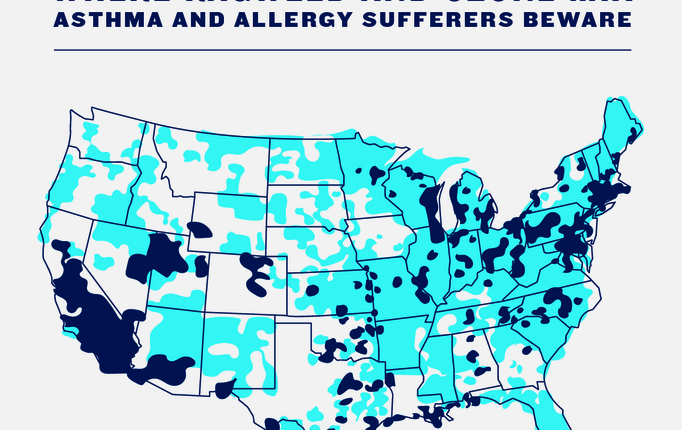 WASHINGTON (May 13, 2015) –One-in-three Americans lives in the "sneeziest and wheeziest" cities and regions where they are exposed to both ragweed pollen and ozone smog pollution that can worsen respiratory allergies and asthma, a new Natural Resources Defense Council report shows.

As a consequence, these 109 million Americans—living mainly in cities from Richmond, VA, to Atlanta, Philadelphia to Chicago, Oklahoma City to Phoenix and Los Angeles—are more likely to suffer itchy eyes, runny noses and sneezing, and may find it hard to breathe, the report released today finds. And they become more ill than those exposed to only ragweed or ozone pollution.

The report, "Sneezing and Wheezing: How Climate Change Could Increase Ragweed Allergies, Air Pollution and Asthma," is among the first to map the intersection of ragweed prevalence and high ozone smog, which can magnify respiratory allergies and asthma.

It carries a dire warning for policymakers and the nation’s leaders: As climate change warms our planet, millions more Americans could become ill with potentially severe respiratory allergies and asthma.

That underscores the need for the U.S. Environmental Protection Agency to finalize standards to strengthen the health standard for ozone pollution and to slash carbon pollution from the nation’s power plants, which helps create ground-level ozone and fuels climate change. The pollutants that form health-harming ozone smog are emitted from the same fossil fuel burning that produces heat-trapping carbon pollution.

"Americans deserve to breathe clean air, but today millions of us are sneezing and wheezing from allergies and asthma worsened by climate change-fueled ragweed pollen and ozone smog pollution," said Juan Declet-Barreto, the primary author of the NRDC report. “This double-whammy health threat will only intensify, and affect more people, if we don’t take steps to reduce climate change now. For our health and future, the EPA should strengthen the health standard for ozone pollution and set strong limits on power plant carbon pollution.”

"As a pediatrician, I care for the group most vulnerable to the health consequences of climate change-our children, said Dr. Samantha Ahdoot of Alexandria, VA. "Children today are already experiencing worsening respiratory and allergic disease due to impacts on air quality and plant pollen production. These impacts are expected to increase as carbon dioxide concentrations and global temperature continue to rise. That’s why we need to take action now to curb harmful pollution so we can have healthier air – reducing allergies and asthma, and ultimately saving lives."

NRDC's report finds that 35 major cities where people are exposed to both ragweed pollen and ozone smog. The most vulnerable regions are the Los Angeles Basin, the St. Louis area, the Great Lakes Region, the Mid-Atlantic and the Northeast, the NRDC report shows.

With the exception of 1998, the 10 warmest years in the instrumental record (dating to 1880) have all occurred since 2000, according to the National Aeronautics and Space Administration and the National Oceanic and Atmospheric Administration. The scientific consensus is that climate change, caused by carbon pollution, is pushing temperatures upward.

This is a health problem because warmer temperatures enhance the reactions that form ozone pollution. Ozone exposures irritate the lungs and can lead to lung inflammation, diminished lung function and worsen asthma symptoms.

With more carbon pollution in the air, ragweed produces more pollen in late summer and fall. In addition, other pollen-producing plants such as birch, oak and pine trees tend to produce pollen earlier in spring and for a longer time, studies show.

An estimated 50 million Americans today have some type of nasal allergy, the NRDC report notes.  In 2012, an estimated 7.5 percent of adults and 9.0 percent of children were diagnosed with seasonal allergic rhinitis (or hay fever), whose symptoms include inflammation and irritation of the nose, sinuses, throat, eyes, and ears as well as sneezing, runny nose, and itchy eyes.

NRDC's report identifies the following cities now faced with both ragweed pollen and ozone pollution, and the associated threats to respiratory health:

There are both large and individual steps that can be taken, the report shows, to better safeguard the air we breathe and protect our health:

Strengthen the carbon pollution standards: The EPA should finalize its Clean Power Plan and establish strong national standards to limit carbon pollution from power plants, the nation’s largest source, and curb climate change. The agency is on schedule to do so this summer.

Develop better pollen data collection: The U.S. government should improve the extent and frequency of ragweed (and other allergenic plant) pollen data collection. This could be accomplished through developing a cross-agency comprehensive reporting and tracking system, and by establishing a network of daily pollen collection sites.

Provide more information to the public: Updated and timely data on airborne pollen concentrations should be made publicly available through the recently launched Climate Data Initiative, part of the President’s Climate Action Plan.

Protecting Your Family from Pollen and Ozone

NRDC’s report also offers tips to avoid overexposure to ragweed pollen and ozone smog during summer and fall days with high pollen counts or high ozone levels, especially if you or family members have allergies or asthma.

Keep track of pollen counts in your area by following newspaper, radio, or television reports or checking online at www.aaaai.org/nabOn especially high pollen or ozone days during allergy season, put car and home air conditioners on recirculate, and keep doors and windows closed.After working or playing outdoors, take a shower and wash your hair (or towel off with a damp cloth) to remove pollen, and change your clothes.Try to save your most strenuous outdoor activities for days with relatively low ozone smog levels, or do them in the morning, when ozone levels are lower. Check online resources like www.airnow.govfor forecasts of local ozone conditions.If you have allergies or asthma, see a medical professional. Take appropriate medication and precautions; consider wearing a filter mask before doing outdoor chores.

For the 2015 "Sneezing and Wheezing" report, click here: http://www.nrdc.org/globalwarming/sneezing/contents.asp

The Natural Resources Defense Council (NRDC) is an international nonprofit environmental organization with more than 2 million members and online activists. Since 1970, our lawyers, scientists, and other environmental specialists have worked to protect the world's natural resources, public health, and the environment. NRDC has offices in New York City, Washington, D.C., Los Angeles, San Francisco, Chicago, Livingston, Montana, and Beijing. Visit us at http://www.nrdc.org and follow us on Twitter @NRDC.