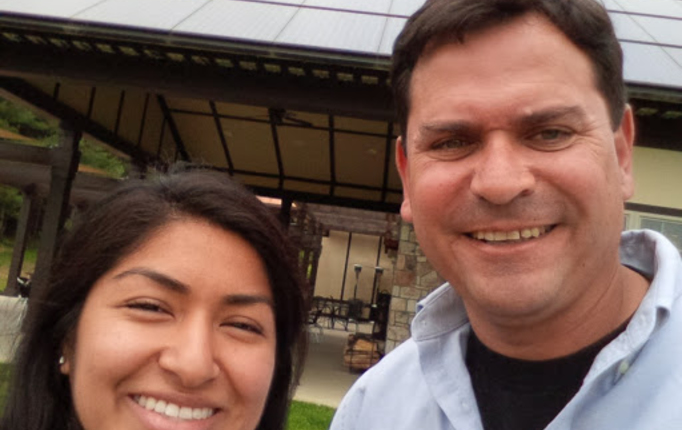 Did you know that it was Latino Conservation Week?

During July 11th through July 19th, Latinos everywhere were invited to celebrate a week of enjoying and advocating for the outdors and our environment. This is the first year that Voces Verdes has participated in this national celebration, which is meant to put a face to the many Latino leaders that are tirelessly working to clean up our air, water, lands, and overall climate.

Joe Sanchez is one such leader. He is COO and co-partner of Sol4r (SolarFour), an award-winning clean energy company in Leesburg, VA launched in 2010, whose mission is to become the premier provider of simple and green energy technologies for residents, commercial needs, and government.

Joe is an overall awesome human, but here are a just few toplines about this incredible Voces Verdes trailblazer holding it down in Virginia:

He is a Georgtown University Alum.

He is a US veteran who began his career in the defense and intelligence sectors.

He was appointed to the Environmental Advisory Committee of Leesburg by Mayor Kristen Umstattd.

He can speak German and Russian.

He is a karaoke lover.

*I'd also like to mention that Joe's co-partner is Dr. Mary Haberl, a retired educator, advocate, and entreprenuer, who is equally incredible - you can read more about Mary's tireless leadership here.

Joe recently spoke at the Eastern Foundry in Arlington to a packed room of business leaders, technology entrepreneurs, and state lawmakers about his support for energy efficiency and clean, renewable energy. This business roundtable, called "The Next Deployment: Clean Energy", was headed by Environmental Entrepreneurs and co-hosted by Voces Verdes and the Alexandria Emerging Technology Center. Joe and other speakers emphasized the importance of smart policy and clean energy in creating good jobs for vets. He commented, "We're a fully minority company," [referring to himself as a Latino veteran and Sol4r co-partner Dr. Mary Haberl as a woman in clean tech] and we plan on employing more veterans."

The veteran experience is something that Joe knows on a personal level. He spent over 23 years in the US Army before retiring as a Lieutenant Colonel and greatly understands the difficulty soldiers face, both during their service and after. At the roundtable, Joe commented, "I have seen peoples' lives forever changed in the fight for foreign and fossil fuel. Building the clean energy economy is one of the most honorable things we can do right now - that's why I see it as the next mission." He has seen how much more effective we would be as a military if we fully transitioned to clean energy use. "We need to transition as a nation, but Virginia should be the leader."

By partnering with Energy House to implement performance-enhancing energy efficiency upgrades alongside increasing solar panel use, Joe and Sol4r are proving that the New Virginia economy can be a reality with renewables at its foundation. He knows his experience as a vet is scaleable: every army service has a mandate now in which they must look at major installations and dictate that certain amounts of energy from those installations be sourced from renewable energy. Veterans have already been trained to work on these clean energy technologies, and could be a pipeline for filling out the clean energy workforce. Clean energy jobs, particularly those in the solar industry, continue to rise, employ increasingly diverse communities, and provide competitive salaries, a necessity for many veterans who are in need of stability. Not to mention, supporting the clean energy economy in Virginia will support the state's compliance with the Environmental Protection Agency's Clean Power Plan, which sets the first-ever limits on the amount of carbon pollution from power plants, helping to grow clean energy industries, create tens of thousands of good jobs, decrease the cost of electricity, and provide cleaner air for healthier families, all while addressing the impacts of climate change. Pretty amazing.

Joe believes that investment in clean energy is both a logical and moral answer to creating jobs, supporting veterans, and fighting climate change. "I hope our story motivates others and increases awareness about this issue," says Joe. "We have to keep our state leadership accountable to their support of renewables. The Clean Power Plan is only the starting point - we have to keep moving forward. It won't take much to meet the standards, so why aren't we doing it?"

Thank you, Joe & Mary, for using your #Voces4Climate!